Building Big on 160m for the VK/ trans-Tasman Contests. 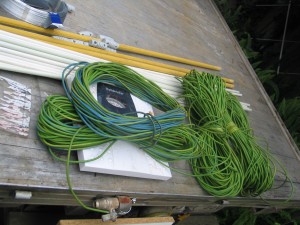 Need still more hints? It takes two strong men to carry and lift it into position, prior to hoisting the roughly fifty kilos of weight into the air, with the aide of lifting pulleys, four strong blokes, a 4wd, about two hundred and fifty meters of rope and three 35m tall Mountain Ash trees for the supports. 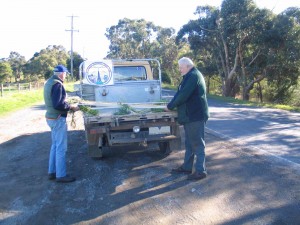 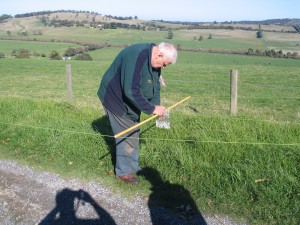 Jim working on the center feed point for 600 ohm line

Initial attempts to match this full size antenna, via a random length of 38m of open wire feed line, through three different ATUs, were a complete, utter and dismal failure, with the resulting extremely high impedance feed point, beyond the ATUs ability. After lots of head scratching, members actually reverted to some serious reading of the ARRL Antenna Handbook “matching” theory chapters.

A decision was made to lengthen the 38m long, random length feed line, out to a full, half wave resonant length of 78 meters (allowing a 0.03 velocity factor) The balanced feed line then had to be physically run, in a large spiral loop around all four sides of the Kurth Kiln site, in order to support the extra 40m of length.

A quick check, plus about thirty seconds of ATU adjustment and “Viola”. The resultant SWR was 1.1-1 with an virtually flat SWR across the 160m band.

For the primary contest antenna, a full quarter wave vertical was constructed.  “ El Presedente”, Jim McNabb (VK3AMN) used “Flickee” to place a line over the top of the 30 meter tall pine tree close by, to the main shack. A slightly longer than resonant, quarter wave length, multi strand copper wire, with two top wires, was then hoisted over the pine tree, stretching the top wires out as close as possible to horizontal, in a T design.

Seventeen, multi strand quarter wave length, copper radials were each measured and cut to 40 meters in length, then stretched out and pegged down on the ground around the base of the vertical element, with all radials attached to a linking, square loop, of larger diameter copper cable. The antenna was then connected via a short, approximately 1 meter long piece of RG8 coax, to a “You Kits, model FG-01” antenna analyser. 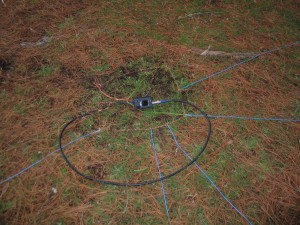 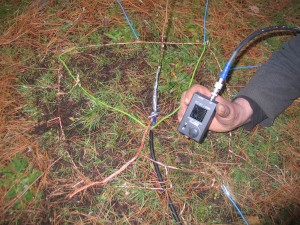 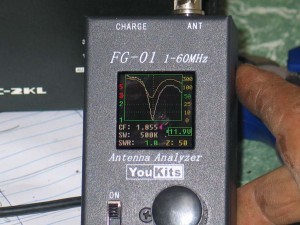 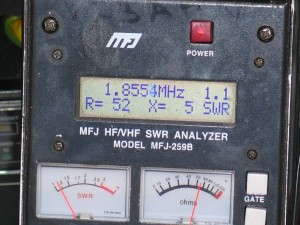 Initial resonance of the vertical came in at about 1.5mhz. The base section of the vertical element, was then pruned down in length until a perfect ‘”dip” on the analyser was achieved at 1.855mhz. The large full size vertical was then direct fed via RG-8u coax, from the shack, located about 20 meters away.

For local chitchat, club members assembled the “usual “ portable Echolink node, VK3KID/L for the weekend at the Kurth Kiln. 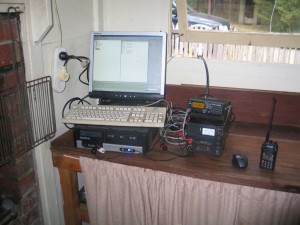 Members then shared duties in both the operating and logging “combat seats” and successfully recorded ninety-five contacts into the contest log, with this total including nine contacts into various regions of New Zealand.

No mains power is available in Kurth Kiln Regional Park.

Club members trucked two portable generators into the heritage listed site. The main generator used was a 6kva three-phase unit. A backup 2.5 kva unit was on standby. Unfortunately, EMI emissions levels from the generators were significantly above acceptable levels.

“El Presedente “ home brewed an EMI filter for connection at the generator output. A commercial voltage regulator unit was attached at the other end of the main line to the shack, prior to distribution via power supply boards. Problem fixed!

Members assembled 923 meters of copper wire plus 160 meters of baling wire (in the balanced feed line) using a total of just over 1083 meters of wire, in the antenna farm, for participating in the Sherbrooke Community Radio Clubs Inc successful foray into the VK/trans- Trans Tasman Contest 2012.

Planning has already commenced for a “Bigger & Better” antenna farm for 2013 contest.

More photos of the weekends activities, the antennas and the AC filtering/voltage regulation units, may be viewed on the club website at www.vk3kid.org.au

If you would like to be part of our group drop us a email (Jim james.mcnabb2@bigpond.com) or drop in at one of our next meetings.

A contest is only worth competing in if it’s run far and above board with this contest there were some people that changed there numbers from the last few min on air at the end and claimed they had won, so I can not be bothered to enter again