EMI ( Electromagnetic Interference ) Filters, also known as RFI (Radio Frequency Interference) Filters, basically are passive electronic devices that are used to suppress conducted interference that is found on a signal or power line. Electromagnetic Interference (EMI) is unacceptable electromagnetic emissions, natural made Generator or other man-made equipment, which result in the degradation of Radio reception “Frequency Interference (RFI)” is detrimental electrical energy in the frequency range, which is for the specific transmitted radio frequency. Major sources of EMI and RFI include microprocessors, switching power supplies, generators, AC motors, and electrical power cords (which basically act as an antenna).

EMI Filter used in is a YUNPEN YC10T1L2, this unit works from well below the 160m band and works through to the top end of the HF band 30m+ , I have placed  Ferrite Suppression Beads (I used ferrite’s that I have taken of any power lead ECT that I have scraped)  on each wire coming in and out of the unit these are to stop any RF from leaking through the system and there is two ferrite suppression beads on the earth lead to make a significantly higher resistance to higher frequency content  in the input and out put leads.

I have also fitted a small red light on the output of the box so I can see if I have power.

This unit has proven to work very well on all bands and any generator that we have used.

On all the AC leads in and out have ferrites on then and on the earth lead we have two ferrites together on the lead and one on the into the filter. Each ferrite stops any AC noise from coming up that wire. 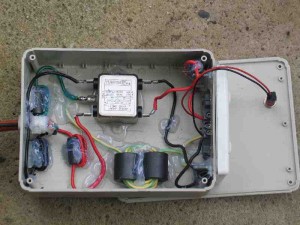 EMI unit at the Generator end of the power lead.

At the radio end of the leads we use a AVR VR SERIES Automatic Voltage regulator this unit also has a EMI filter in it as well, it is a TSC EMI Filter 03AA1 I have also added ferrite suppression beads on all the in and out leads, I have also added ferrite beads on the two out lets we found that the 2m node was getting back through to the HF gear and this seem to have stopped it. 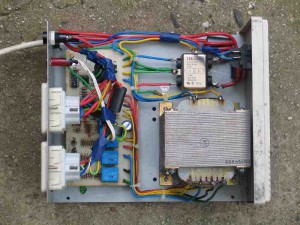 I have also placed ferrite on the output leads and between the output outlets this stops any up wanted AC noise coming from any of the two units we plug in on the system out lets. 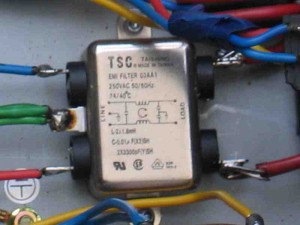 With suppression at both ends of the AC power leads we have a very clean power source, with the voltage regulator unit giving us a stable 230v AC for the radios to work with on 160m etc.

“Without the spirit of hams helping hams the hobby would end”

The club is regularly involved in contests, with the group of radio amateurs setting up there equipment, the members working together for the contest, this is hands on, the best way to learn. We some times move the meeting weekend to run contests so check the web page to see where and when we will have our meeting.