A High Performance Antenna System for

Following the Sherbrooke Community Radio Club’s Trans Tasman result in 2012, members embarked on serious study of antenna articles[i] and the classic textbooks, ranging from the recent, superb publication, being “ON4UN’s Lo Band Dxing”[ii], through to old QST[iii] articles from the 1930-50’s, and also the,” More Wire Antenna Classics Handbook, Vol 2 (ARRL)[iv], all with the aim of building a better antenna for this year’s contest.

The ultimate goal was to combine a high performance antenna system with a superior contest grade transceiver (an Icom IC 7600) and to, hopefully, improve our own contest operating procedures to a very high level.

Members looked closely at the 2012 contest results, the antenna system and transceivers that were used last year. Then, they decided what they would like to achieve in 2013. The primary goal was the construction of a high gain, low radiation angle and omnidirectional antenna on 80 meters.  Notice the emphasis on “omnidirectional.” The club wanted to achieve substantial signal gain, preferably from all compass directions.  Again, it’s the old amateur saying, “If you can’t hear them, you can’t work them”.

The major secondary goal was that the antenna system had to be affordable to build on a low budget, without any engineering expertise or specialized tools.  Our antenna had to hear and transmit much better than a simple dipole or inverted vee, preferably in all directions at once; and not cost the earth to build.

The question to be answered was, does such an antenna system exist, or has it ever existed?

Our clubs answer is; if it did not, it is most certainly well on the way now! Members have read, rag chewed and now, finally, they have constructed and are in the process of fine-tuning a high gain wire array, which practically anyone can afford to build.

With conventional antenna theory, gain is normally achieved in the one direction, at the expense of signal loss in other directions. Such designs use combinations of a driven element along with directors and/or a reflector. The disadvantage is the need to be able to rotate the array, which is very difficult on 80 meters. Other systems achieve gain by using multiple verticals and phasing/switching harness.  This is more achievable on 80, but lower gain; large verticals are needed and are not really affordable on a tight budget. Other systems use separate receive and transmit antennas. Again, this is achievable, but often complex and more expensive to construct.

The antenna system built for this years contest, by the club, is not the clubs original design, but has been a evolution of the excellent design by KE4UYP (endnote 1)

This antenna combines dual horizontal/vertical polarization with top fed, linear loaded, phased vertical element sections. The antenna is of a 3/4 wavelength long, on one side, with a quarter wave horizontal counterpoise on the opposite side. Several club members run this design, as their home 80-metre antenna with very good results. The radiation pattern is bi-directional in an elongated figure eight pattern with a quoted, 5.9 dBi gain.

SCRC members built two identical antennas and then co-phased them, locating them physically, a half wavelength apart at the feed points. The antennas were aligned with their axis running at ninety degrees to each other, giving an elongated four-leaf clover radiation pattern, with close to 360-degree coverage. Each antenna was fed with a 1:1 current balun via a quarter wave of 75 Ohm coax into a T connector and from the T connector to the transmitter with a quarter wavelength 50 Ohm coax, resulting in a theoretical gain of 8.9 dBi. 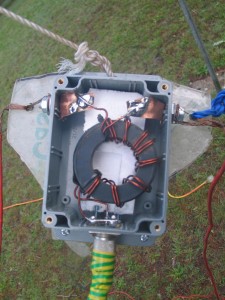 We should clearly point out at this time; these trials were carried out at our “Kurth Kiln” location in a relatively small clearing. There is extremely dense forest, very close around the site. It is, literally, physically impossible, to walk around in this forest with a field strength meter on a pole, in order to achieve accurate polar plot patterns. That’s a club project for another day and another larger, much clearer, test location.

Our first trial with this driven, phased array, commenced in February this year.

Simply stated, this array provides the best antenna performance ever experienced on 80 meters by any club member. After receiving a 30 dB+ signal report from VK7NWT (Scott) in Sisters Beach, Tasmania, the transmitter output power was progressively wound back from 100w, down to minimum transceiver output of 2 watts, with a 5/7 report being received.  A 5/9+ report was also received from a portable VK4 station, located on Cape York, in far North Queensland. Very strong reports were also received from Nelson in New Zealand. At the end of the initial trial weekend, we all went home patting ourselves on the back and smiling from ear to ear.  Big mistake!

Our second trial session was in the week commencing 3rd of May, with the Harry Angel Sprint event on the 4th and ending with the 2013 Trans Tasman Contest on the 11th. Results prior to the competition, had us doing some major head scratching, and back to some serious reading of the books again! 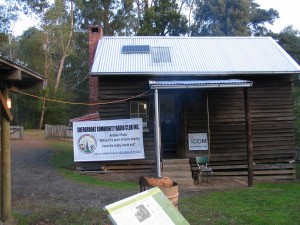 The set up was slightly different this time and physical distance between the two legs of the array was less.  This created some major headaches that were not resolved to our satisfaction, prior to the Trans Tasman. Our array did not resonate well and we suspect that the physical spacing between the two legs is critical to performance.  The system was rechecked but the issues with the phasing system remained.  For the competition we ended up running two 50 Ohm resonate feed lines and switched between the two antennas giving the coverage required at the flick of a switch.

Our notes from trailing this array to date are as follows. The dimensions of each side of the array must be identical. This is absolutely critical. A small mismatch in length creates major matching problems, as we found out the hard way, during our initial adjustments. A YouKits, FG-01, Handheld SWR Analyser, was used to independently adjust each half of the array, to exact resonance on 3.6 MHz prior to the array assembly.  An effective operating band with of 110 kHz was achieved.

The same “identical” note applies to the length of the quarter wave phasing harness.  Near enough is not good enough with these measurements, they must be absolutely identical in both physical length and velocity factor of the coaxial cable used in the phasing harness.  The principle applies again, for construction of the two 1:1 current baluns.  Also, when adjusting the antenna or antennas to resonance, don’t adjust the ¾ wave driven side, adjust the length of the counterpoise only

Now for some real world results.

Our on air competition results, using this array, to date, are as follows.

The clubs hand written log, (ouch!) submitted for the Harry Angel Sprint Contest, records 70 contacts in 106 minutes (official 4th place).  The log submitted for the VK/ZL Trans Tasman, records 266 contacts in 6 hours, with contacts into all Australian states with the exception of VK8. Most ZL regions were repeatedly logged. The DXpedition on Norfolk Island (VK9NT) was also worked on several occasions during the evening, as were a number of VK6 stations.

Future club development plans for this array, include better sorting out of the phasing system, including possible use of open wire feed line to reduce the hanging weight and also the feed line losses, plus scaling back of this system for use on 40 and 20 meters where fitting on a suburban block becomes entirely possible.

So, how much did this high performance array cost?

1) The 500-meter drum of insulated five strand copper wire that we obtained from a scrap merchants yard cost $50.  About 80 meters was used for each half of the antenna, leaving about two thirds of the drum for other projects. Cost, $16.

2) Second hand plexiglass, with the pieces again purchased from a scrap merchants yard, were used for building the fourteen, hand cut, and corner and end insulators, cost $5.

3) Two homemade 1 to1, current baluns were constructed, each costing $19.50, the parts were obtained from ebay. Cost $39

4) A T-piece coaxial connector was purchased for $2:50, from the ham fest.

The total for the materials used in building the entire array, came to $62.50.

For the costing of this antenna system, we did not include the cost of the coax feed line and end ropes.  It was assumed the majority of amateur operators would have an existing supply of coax to some extent and some suitable ropes.

With a theoretical gain of 8.9dBi, a better value for money, high gain, 80-metre antenna system, will be difficult to find.  If you do, please tell us about it. We may well try it.

S.C.R.C members are preparing an article, detailing the building of the insulators and baluns used in this array, for submission to AR and possible inclusion in a future issue in the “Foundation Licence” section.

Our sincere thanks go to Icom Australia, for providing the club with the ICOM IC 7600, for use prior to and during the competitions.  Members are writing a “User Impressions” article, to be submitted to AR, again, for possible future publication.

The authors explain what they hoped to achieve with their ideas for a high performance 80 metre antenna, and detail what they did, and how they did it, and some views on the performance outcomes, in their article.

Anyone who has attempted to improve their own 80 metre antenna performance will at least relate to many of the views expressed in this article.