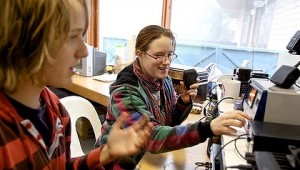 The pioneering electronic social network is experiencing a resurgence.

WHEN you think of the instant communication at our fingertips thanks to web-enabled mobile devices and the social media explosion of Twitter and Facebook, it’s easy to dismiss amateur radio as a dusty relic destined for oblivion.

But the bastions of ham radio believe the century-old form of radio communication is as relevant as ever – it proved invaluable during recent natural disasters in Australia, Japan, China, Pakistan and Haiti.

One amateur radio veteran of more than 50 years, Doug McArthur (whose call-sign is VK3UM), lived through the Black Saturday bushfires, relying on his UHF CB radio to warn neighbours of the approaching flames.

When the mobile phone network was jammed and the fire had damaged landlines, locals flocked to citizen band radio.

”UHF CB was certainly a great communication tool during the fires … we knew where the trouble spots were, which neighbours had stayed and those who had left,” he says. ”Since that time, about 60 locals have bought UHF CB radios.”

McArthur, 69, turned the early days of a hobby into a career in high-powered broadcasting, setting up the first radio telephone system in Alice Springs and working for the International Telecommunication Union to establish communications in the Middle East.

When Cyclone Tracy hit Darwin, he flew up to assess the damage done to phone systems. It was exactly the meltdown he had predicted, with Darwin’s telephone exchange unable to withstand a ”big blow”.

An amateur radio operator from the Australian Capital Territories, Bob Hooper, was the first to announce to the world that Darwin had been hit.

McArthur says that even in a society of mobile phones and social media, amateur radio is a critical part of the emergency communication mix. ”In a crisis, the mobile phone network will never handle the traffic that’s imposed on it.” 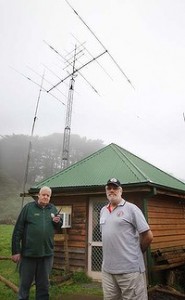 That’s why many in the hobby take part in ”field days”, setting up a radio station in the bush using alternative power sources.

But it’s not all serious stuff. Radio hams like to experiment and McArthur’s toy is a giant satellite dish built in the US in the 1960s and used to test the radio path across Bass Strait.

He bought it from Telstra before it could be sold for scrap metal and erected it on his Glenburn property. Not even a near-fatal stroke stopped him from attempting to reach the moon with his one-tonne dish.

”My neighbour is a welder, so we set to rebuild the frame and control system,” he says. ”I use it for reflecting signals off the moon, the detection of deep-space signals and astronomical noise sources, which has been a lifetime ambition for me.

Only a couple of people in Australia have ever done it.”

It might seem a strange pursuit, but the precision and the challenge of the moon bounce thrills this Morse-code expert.

”Of all the power that you radiate off your aerial, 98 per cent of it is lost getting to the moon and of what hits the moon, only 0.6 per cent gets reflected, with 98 per cent of that coming back.”

McArthur Skypes most nights to amateur radio friends in Sweden, the Netherlands, France and Britain but ditched Facebook after a day because he found it to be too impersonal.

”Facebook and Twitter are about wanting to know what your friends are up to,” he says. ”The radio is exactly the same.”

”You’re out in the bush with an antenna and a map and you listen for the transmitter signal, which comes on for one minute and then turns off for four minutes. You find it and check it off and move on to the next one.”

It might not be everyone’s idea of a good time but for Bramham, hitting that elusive target while traipsing through the bush gives him a huge buzz.

”There’s a lot of skill involved, especially on VHF and UHF, because you get a lot of reflections. You might think it’s in that direction but it’s bouncing off a hill over there.”

When Australian astronaut Andy Thomas was on a mission to the Russian Mir space station in 1998, Bramham managed to arrange a time to speak with him during a 10-minute window of opportunity when the space shuttle was just 400 kilometres away from Melbourne.

”I asked if he could talk to our radio club and because it was May Day, he had been given the day off,” Bramham says. ”We had 70 or 80 people in here listening. A lot of the guys will never forget that night.”

Wireless Institute of Australia spokesman Jim Linton (VK3PC) says one of the biggest things to happen to amateur radio is the removal of Morse code as a minimum requirement for an operator to obtain a licence.

The foundation licence is now simple enough for young children to acquire.

About 20,000 Australians have amateur radio licences, with increasing interest being shown by younger people and women.

”There was virtually no one interested before the arrival of the newest entry level,” Linton says. ”Now we have more activity on air, increased numbers being assessed and a higher level of club membership.”

With the higher standard and advanced licences, people can operate on more bands and modes, including digital transmissions online.

Using radios at both ends and the internet as the conduit, it is cheap and easy to make international calls known as IRLP (Internet Radio Linking Project).

Maths teacher Edward Seeto (VK3LIP) of the Sherbrooke Community School, which has its own radio club, demonstrates on a hand-held radio, typing in a code on a keypad and accessing a web-enabled local repeater to connect to a user in Dallas, Texas.

”Radio continues to exist because it’s integrated the new digital technology, and convergent technology is how it will survive,” Seeto says.

From an outdoor radio gazebo with its 15-metre-high Nally radio tower, a dozen of his students are learning the ropes from ham radio veterans Randall McDonald (VK3RM) and Jim McNabb (VK3AMN), who volunteer their time on Thursdays and on weekends.

Grade 8 student Monique Golub achieved her foundation licence in grade 6 and now competes in amateur radio challenges such as the 160-metres Trans-Tasman contest, with points scored for contacts made over a six-hour period.

”I just love the people you meet and the competitions,” the 13-year-old says.

”I’ve spoken to a chef in Texas and an astronaut on the International Space Station.

”I was the first girl in the club and now some of my friends have joined.”

Seeto says students have learnt to be resourceful and experimental through building their own equipment, and it has given them a practical understanding of mathematical equations such as Ohm’s law. ”They’re not passive consumers,” he says.

”They make things like their own antennae from cast-offs. There’s quite some maths and dexterity involved. [Amateur radio] is encouraging them to pursue maths and sciences, and providing social interaction.”

As a relative newcomer in the past five years, Richard Holmes (VK3TXD) is keen to dispel the amateur radio stereotype of old blokes tinkering in beeping sheds.

”I think we have to demystify amateur radio,” he says.

”You don’t have to be a propeller-head to be in it. There are a whole range of personalities that do this, including a few bombastic fools – we’ve got it all.”

He hopes a new generation of young amateur radio operators will find clever ways to evolve the hobby and embrace its global connections.

For Holmes, the mystery of contact has always been the real lure.

”Amateur radio is a bit like fishing – you never know who’s going to come back,” he says.

”You twiddle around on the bands and you can hear the world come in.”

Homebrew – building your own equipment.

DXing – tuning in to a distant radio signal.

Porcupine – a car with several antennas on it.

Sched – to schedule a time to talk.

Dogpile/logjam – people all trying to talk at once.