Please note this tuner we use in exams at our club. If you would like to know more about them then go to MFJ web site.

You have to learn how to hook antenna tuner up to your transceiver properly and tune them correctly to make your radio think that it is feeding it’s signal into a “perfect or near perfect 50 ohm load called your antenna.

An antenna tuner, (transmatch), doesn’t really TUNE your antenna OR ANY PART OF IT!

“THEY TRICK YOUR RIG!

What an antenna tuner or trans-match does do, however, is transform the impedance at the antenna feed output at the radio to a value that your transceiver can handle, (typically 50 Ohms).
When thinking about antenna tuners and SWR, it’s important to remember that the tuner has no effect whatsoever on the SWR between itself and the antenna. It’s the SWR between the transmitter and the tuner that is changed with the tuner controls.

In layman’s terms, all a tuner does is act as a kind of adjustable impedance transformer between the radio and the antenna. It takes whatever impedance the antenna system presents, up to the design limits of the tuner, and attempts to convert it back to 50 Ohms–or something reasonably close to that value for the transceiver. When the transceiver “sees” a 50 Ohm impedance, it is able to load or produce it’s maximum designed RF output into the system because it is designed to operate into a 50 ohm load.

That power is transferred through the antenna tuner, to the feed line and, ultimately, to the antenna–minus any losses incurred along the way.
If you have high loses and a poor excuse for an antenna, you will have a poor excuse for a good signal no matter how well your tuner “tricks” your radio. Most of the power will be lost as heat in the tuner and very little will get to the other station!

These losses are the reason that the highest efficiency feed-line for each individual case is desirable and why some amateurs use ladder line on HF, which has the least loss per foot, which means maximum power at the input terminals of the antenna.

HOW TO HOOK UP AND USE?

So now that you have a better understanding of what an antenna “tuner” actually does, let’s hook one up in a typical HF station.

In the block diagram below we have a typical Hf station setup consisting of: 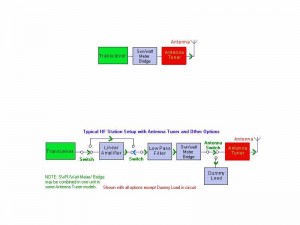 Take a look at the block diagram above and notice where the antenna tuner and SWR meter are in relation to the flow of the RF signal coming from the transceiver.

PLEASE DISREGARD THE LINEAR AND LOW PASS FILTER FOR THE MOMENT! (Your station may not use them)
You will notice that…. first, from left to right, you have the transceiver, Swr/watt meter, ANTENNA TUNER and then the antenna on the output.
The rf moves from the transceiver to the SWR/WATT meter, then finally through the “tuner” and out to the antenna.
You just learned how to hook it all up! Just remember that our goal is to make the transceiver think all is well, and in order to “read” the SWR and Power out pertaining to “all is well”……at the radio’s output…the meter must be between the radio and the tuner.

NOT ON THE ANTENNA SIDE!

Most antenna tuners have an inductance rotary switch and two capacitors. (refer to photo at top of page) The capacitors are often labelled ANTENNA and TRANSMITTER. In some antenna tuners the inductance switch is replaced with a continuously variable inductance, popularly known as a roller inductor.

Let’s assume you’re using a tuner with an inductance switch, because they are the most common.

SHOCK HAZARD!  NEVER TRANSMIT WITH THE TUNER COVER OFF!
TURN OFF THE POWER TO THE RADIO!

Place both capacitor controls at their mid-range positions or follow the instructions that are in your user’s manual.

Don’t trust the knob markers if this is your first experience with the tuner!  If you are comfortable with the next procedure, remove the cover of the tuner and turn the knobs until the moving capacitor plates are only half meshed with the stationary plates. If the knobs are pointing to half scale with the reference markings on the knobs and front cover, consider yourself lucky. If not, loosen their Allen screws and rotate the knobs so that they point to mid scale. Re-tighten the knobs, replace the tuner cover and you’re ready to go.

Turn the radio on and tune receiver to an un-used frequency on the band you desire, listen for a few seconds, with the antenna and transmitter controls at mid scale, move the inductance switch to each of it’s positions until you hear the loudest noise or signals coming into your radio. Then, rotate the antenna and transmitter controls until you get to the absolutely loudest noise or signal level on the radio. All three of these controls interact with each other so practice on several bands to get the “feel” of the procedure.
Select your final band of operation and repeat the procedure above. When noise peaks out using your ears and the S meter, your tuner settings should be very close for final operation. With your rig set to low power monitor the frequency to assure that it is not in use, send your ID then transmit a continuous carrier while you tweak the antenna and transmitter controls for the lowest reflected power reading with the highest output power as read on the Swr/Watt meter. You may find that you have to vary the position of the inductance switch a position or two either way to get your best match.
Play it safe and un-key before turning the inductor switch…un-key first…. turn the switch…key up…. repeat as needed until lowest SWR and maximum output. Be gentle to your radio; keep the key-down periods as short as possible. Depending on the impedance at the antenna input (and the overall design of the tuner) you may not be able to obtain a flat 1:1 SWR on all frequencies and bands. Any thing below a 2:1 or lower will work well for you.
Also important to remember is that your Swr will change, go up, as you tune further away from the frequency you used to “trick” your radio! So re-check and re-tune as needed as you move around the band.
You can get an idea of your SWR bandwidth by starting with your original frequency, and using the procedures above with low power, (don’t move any knobs or switches after best setting)…sweep or tune your VFO up and down the band while watching the SWR readings and note the frequency where the SWR reaches 2:1 at the highest and lowest frequency. Stop there! You may want to record these frequencies for latter reference.

If your on 40 meters at say…7.262MHz as your starting point, and your SWR is 2:1 at 7.292MHz and the highest going the other way is 2:1 at 7.259MHz, then your “safe tuning range” without retuning the antenna tuner would be about 60kHz.
Keep in mind to use very low power and ID because your signal may be heard for a split second as you tune across the band! When that transmit key is down, someone somewhere can hear you. Even a dummy load gets out somewhere!

Remember you are “TRICKING” your way around a good antenna!

In reality, there is no “tricking” and we were playing with words here like “tricking, fooling”, etc.
It is useful to employ a matching device, the antenna tuner, between the transmitter and the antenna feeder when antennas with complex impedance’s are used….. so the transmitter will “see” a 50 -52 ohm load even though a significant mismatch is present at the antenna feed point. The tuner, matchbox or trans-match as it is sometimes called, will not correct the actual SWR condition on the feed line OR antenna, but it will resonate the antenna system as a whole and allow the transmitter to deliver as much power to the antenna system as possible within the design parameters of the tuner. The transmitter now can produce it’s rated power out to the tuner in the hopes that the tuner can do it’s job and get most of that power into the antenna system with some efficiency.
Bottom line: Your transmitter will not know that you are trying to “load up” those old rusty bed springs or that poor excuse for an antenna! Just because you’re now seeing that magic 1 to 1 VSWR reading on the meter does not mean you have changed the design of those old rusty bed springs you’re trying to us as an antenna!!! The more efficient your antenna system…..the better! If the antenna has been properly designed in the first place to show the radio that 50 ohm impedance it is looking for…you won’t need that tuner! Remember, a tuner does not “tune” the antenna or any part of it’s system. It only shows the radio a 50 ohm load to work into. There is no substitute for a well designed antenna! 73′s.

Your SWR meter reads the reverse energy in a coax, and converts that number into a value called the “Standing Wave Ratio”. That number has very little meaning. The value is when you convert that number back into what it measured in the first place, which is the percent of returning energy. That is why you need a SWR meter.

You should always use an antenna tuner. It goes near your rig, in the shack. Its duty is to match your antenna and coax to the impedance of your rig, not to change the SWR in the coax that goes from the antenna down to the antenna tuner. Many radios have tuners built in. Some tuners are automatic.

Electrical energy moves forward and backward in a coaxial cable and in ladder line. (Everything I tell you about Coax is also true for ladder line, except that ladder line has far less loss.)

Electrical energy moves forward because the generator (your rig) pushes it toward the antenna.

It moves backwards because the antenna can not absorb all the energy, so the un-absorbed energy goes back down the coax. (The absorbed energy is converted into Electro-Magnetic energy and is transmitted out into space.)

The reflected energy will be re-reflected when it reaches the tuner or the tuned circuit in the output stage of the transmitter. NO LOSSES happen at the reflection points, and your rig will not blow up because reflected energy got into the tuned circuit.
OK, nothing is perfect, and there will be a very very small amount of resistance in the coil and capacitor in the tuner which will create a very small loss, but it is truly tiny. (0.01 dB is a good estimate) This is absolutely true, Honest!

Remember that if you lose 3DB you will lose 50% of your power. 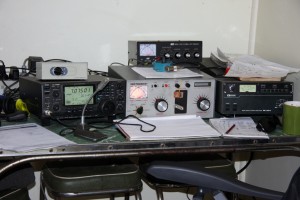 Understanding Antennas, For The Non-Technical Ham